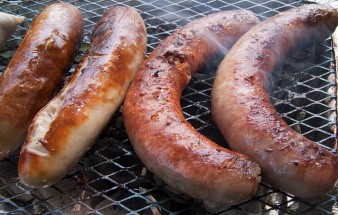 Sausages in some form or another have been around for centuries, with most places around the globe having their own versions – Chorizo from Spain, Kielbasa from Poland, Merguez from North Africa, and more sausages from Germany than I have the time or inclination to list here (over a thousand!), to name but a few. Some are raw, some are cured, some are smoked, but the one thing they all have in common is that, more often than not, they are delicious, economical and hugely popular.

The great British banger plays an important, if not central, role in many of our classic dishes – Toad in the Hole, Bangers & Mash and of course the Full English Breakfast. And who doesn’t love Pigs in Blankets?! This Ultimate Toad in the Hole recipe combines two classics in one – Toad in the Hole and Pigs in Blankets! The term ‘banger’ goes back to the days during the First World War when food shortages meant sausages were filled with less meat and therefore had to be bulked out with things such as cereal and water, causing them to hiss, pop and bang when being cooked, due to the higher water content. But thanks to a much higher meat content, this is no longer the case nowadays, however the name has stuck and is now synonymous with sausages.
It may be getting too chilly for sausages on the BBQ, but there’s still plenty can be done with the humble banger. Of course, there is nothing wrong with just simple grilled sausages, perhaps with a fried egg or two and some homemade chips, but if you fancy a change then how about Sausages & Lentils – our Kentish sausages would be great for this; or why not try our Cumberland sausages in this Smoky Sausage Casserole? And for a fuss-free supper, why not cook some Pork & Leek sausages in the oven, alongside a tray of roasted veggies – peppers, onions, butternut squash, potato, courgette and aubergine all work well here, but the combination can be varied depending on what you have to hand or need to use up.
And, of course, there’s always the classic sausage sandwich, made with crusty white bread and plenty of butter…..now where’s the ketchup….
©Tash Manning

Enter your registered email address, click 'SEND' and we'll send you an email so you can reset your password. Just follow the link in the email.